In 2010 KTM celebrated a great success in the International German Superbike championships (IDM) when the KTM-supported team won the Manufacturer’s Title.

This season there will be two Orange teams in the IDM paddock and on the track thanks to the presentation in Dortmund, Germany this weekend of the new Inghart-KTM Superbike team.

The new team was at the national motorcycle fair « Motorraeder » displaying the KTM RC8 R in its new livery, together with its two top riders, Stefan Nebel of Germany and Matej Smrz of the Czech Republic and the team manager Ingo Haertel. 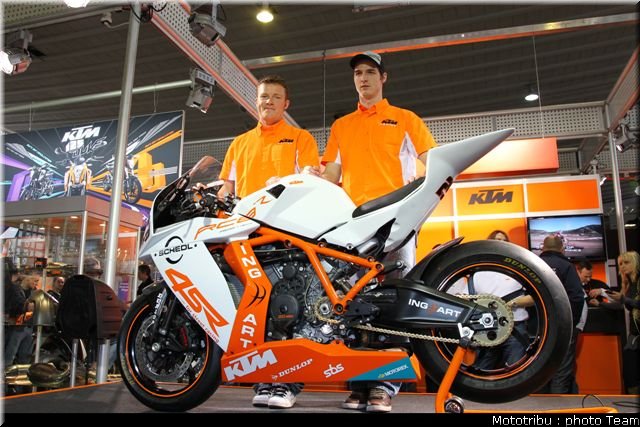 The Inghart-KTM squad will compete on the track alongside the KTM-Germany supported team with Austrian Martin Bauer at the handlebars of the premiere KTM Superbike. Bauer had a successful season last year with the team and together with Nebel, won the Manufacturer’s title for KTM. He finished the series on the podium in third place overall.

Bauer and Nebel have already delivered the evidence that the RC8 R is a highly competitive bike with winning stamped in its DNA. Now the two teams, rivals on the track, share one commitment – to go for the 2011 IDM Superbike title.

Inghart is a well-known KTM dealer in Germany – in Koenigswinter (near Cologne) and Ingo Haertel is renowned for his passion and depth of knowledge of all racing matters. Thanks also go to the great efforts of partners like the Schedl company, Dunlop and Motorex, whose strength and support will make a significant contribution to both of the KTM teams contesting the IDM in 2011.