After two days not being able to take full advantage of the tests at the Jerez Circuit, Marc Márquez could finally get track time on the third and last day of tests scheduled in the Andalusian track.

The Repsol rider completed 40 laps with a fastest time of 1 minute, 42 seconds and 980 thousandths, finishing second of the classification. 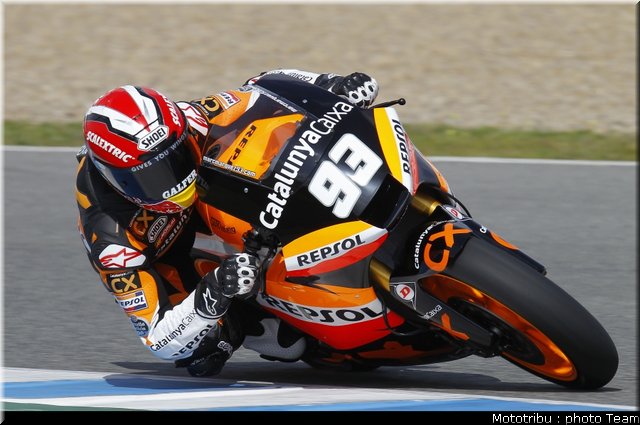 Despite the menacing clouds that remained over the track the whole day, weather conditions were today warmer than in the past two days, with 20ºC ambient temperature and 25ºC of track temperature. So, the Repsol rider was able to finish the last training session on a high before travelling to Qatar in two weeks, where the World Championship 2011 will kick off. Marquez completed a productive test session, showing that yesterday’s crash was no more than a mere anecdote.

The Repsol rider did 40 laps with a strong pace, which confirms the 125cc World Champion’s good adaptation to the Moto2 class. Nevertheless, when at about 2pm the wind started to increase and temperatures begin to be colder, Marquez and his team concluded the tests to avoid running under less than ideal conditions.

This was the last time that Marquez got on his bike before the start of the 2011 World Championship at the Qatar circuit of Losail.