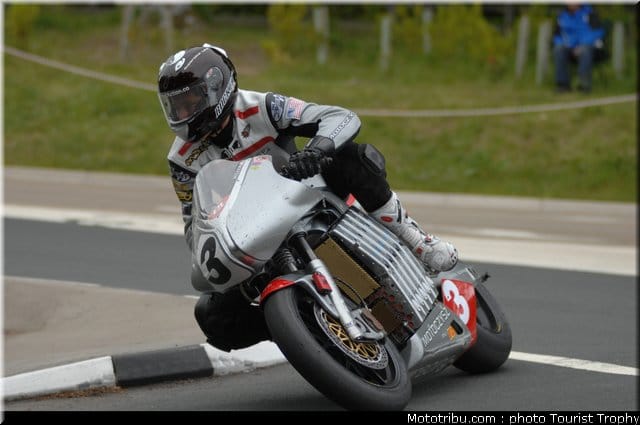 American outfit MotoCzysz, the reigning TT Zero champions, today confirmed that they would be returning to the Isle of Man with two bikes and riders to participate in the 2011 SES TT Zero Clean Emissions race, held as part of the 2011 Isle of Man TT Races fuelled by Monster Energy.

The MotoCzysz E1pc was ridden to victory in the 2010 Race by American rider Mark Miller, who won by nearly two minutes with a record setting average lap speed of 96.82 mph around the 37 ¾ mile course. Miller will return with the #1 plate on an upgraded 2010 E1pc for the 2011 race meeting.

He will be joined in the Oregon based outfit this year by TT star Michael Rutter who will be piloting the all-new 2011 MotoCzysz E1pc. Rutter is an accomplished road racer, with 27 British Superbike Championship race wins, 12 victories at the North West 200 festival in Northern Ireland, and one win and eight further podium finishes at the Isle of Man TT.

He commented:
“I’ve followed the electric bike series on the Isle of Man with interest over the last two years and I’m really pleased to get the opportunity to take part this year. It will be a totally new experience for me, despite the fact that I’ve been racing for over 20 years, but one I’m really looking forward to.”

Michael Czysz, MotoCzysz CEO & Founder commented:
“We were very close to the 100mph average lap last year and this year we are determined to achieve that milestone first lap. I have truly fallen in love with the island and can’t wait to go back. Returning with Mark Miller and the #1 plate is an honour and to add a rider as respected as Michael Rutter and a second MotoCzysz bike is a dream.”

“The MotoCzysz team are the true embodiment of the event’s ethos, creating a demonstrably groundbreaking machine that delivered a headline performance last year. We are really pleased that they are returning and everyone is eagerly anticipating watching them as they look to build on last year’s success.”

The 2011 SES TT Zero race will take place on Wednesday 8th June and MotoCzysz will be one of a number of teams that will be aiming to be the first to achieve the historic 100mph mark for a clean emissions bike. The Isle of Man Government has offered a £10k prize to the first Clean Emissions team to achieve the prestigious 100mph lap around the 37 ¾ mile course

About MotoCzysz, LLC
MotoCzysz is a design and engineering firm known for its innovation and creativity in applying technology to develop new products and solutions. It is working exclusively on D1g1tal Dr1vesTM electric drive systems, electric vehicle components, and electric vehicles. It is the inventor of the D1, the industry’s first fully integrated electric drive which allows automobile OEMs, fleet conversions and others to immensely speed up their electric vehicle design cycle. The MotoCzysz E1pc digital superbike won the two largest and most important electric races in 2010: Isle of Man TT zero, IOM and the e-Power Red Bull MotoGP, Laguna Seca. To learn more, visit the MotoCzysz website at www.motoczysz.com and D1g1tal Dr1ve website at www.d1g1taldr1ve.com